Support Through Diagnosis and Survivorship 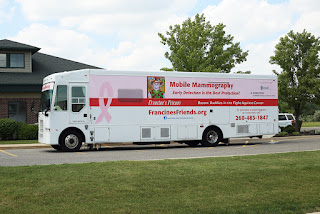 Early detection and access to state-of-the-art cancer treatments are both key components of preventing and defeating breast cancer. When caught early, it can be much easier to effectively and successfully treat. Vicki Torres is someone who understands and has experienced this firsthand.

For 15 years, Vicki has been regularly receiving her annual mammograms, but not in the way you might think. Vicki has only ever received her mammograms through Francine’s Friends Mobile Mammography Unit, a service supported by donors to the Parkview Foundations. The mobile mammography unit is unique in that it provides life-saving services to women in Fort Wayne and the surrounding areas who might otherwise be unable to receive them. The mobile unit travels to parking lots of local organizations and businesses to promote early detection of breast cancer, making mammography screenings more accessible to all women.

Vicki candidly shared that she tends to be forgetful and a bit of a procrastinator, which is why she appreciates her friend and co-worker, Janice Buuck, taking the time each year to place flyers and sign-up sheets at work. Janice’s selfless actions help remind co-workers to get their yearly mammograms through the mobile mammography unit. “When I see the pink coach pull in the parking lot, I know it’s time for my mammogram,” Vicki said.

After signing up for her annual screening, Vicki went for her mammogram in November 2019, which was her first 3D mammogram. The state-of-the-art 3D mammography equipment had recently been added to the mobile unit, thanks to the generosity of donors to the Parkview Foundations. Shortly after her appointment, Vicki received a phone call saying the radiologist saw “something” they did not like and would need to get a biopsy and come back for a follow-up.

Her biopsy revealed an unexpected result. She was in the early stages of breast cancer. Vicki was informed she had ductal carcinoma in situ (DCIS) in her left breast and surgery was the best option to remove the cancer. Giving it some thought, she decided to proceed and schedule the lumpectomy. With the holidays right around the corner, Vicki moved forward, scheduling appointments with her oncologist, Melanie Clark, MD, Breast Medical Oncologist, Parkview Cancer Institute, and surgeon, Lauren Kopicky, DO, Breast Surgical Oncology, Parkview Cancer Institute. Even with her world turned upside down, Vicki still made it her goal to finalize her Christmas shopping and have the wrapping done before her surgery, demonstrating her constant care and concern for others.

She prayed throughout her diagnosis and as she waited for the results from her surgery. On Christmas Eve, Dr. Clark called to say her breast cancer was now a stage 0. After having reconstructive surgery with Kevin Berning, MD, PPG – Plastic Surgery, Vicki spoke to the radiologist and was advised to have genomic testing, which looks for mutations in the make-up of a person’s genes and can help assess their risk of cancer.

Her results were more than she could have expected. Vicki was informed she would no longer need the 16 treatments of radiation that had initially been planned and thanks to her early detection, and regular mammograms, the chances of her cancer coming back were very small.

Thanking God and fighting through tears, Vicki rejoiced that her post-surgical results were the best Christmas present she could have ever received. “I am so deeply thankful for the staff there at Parkview. The people have been amazing. The doctors have been amazing,” Vicki said with appreciation. “It was such an incredible experience having to go through cancer with people like that alongside you. People that don’t pretend to care, but actually care. I have met so many amazing people along this journey.”

It was after her cancer diagnosis and surgery that the unprecedented coronavirus pandemic hit. Like so many others, this affected Vicki financially. In May of 2020, she selflessly volunteered to be furloughed to avoid a layoff of her co-workers. While receiving news of an illness and facing the financial unknowns of a steady paycheck, Vicki remained steadfast in her faith that God is walking with her through it all.

During the furlough, she has been assisting her cousin by driving him to his chemotherapy treatments at the Parkview Cancer Institute for the last seven weeks. She knows first-hand how it can affect patients and feels guilty for not having to endure the treatment herself after her own diagnosis. Something not many people can truly understand.

Giving gratitude and thanks

Cancer has reared its ugly head one too many times in Vicki’s life. Aside from her battle, Vicki has also witnessed her brother’s battle with colorectal cancer 13 years ago and watched her father lose his fight to cancer in 2015. Breast cancer was never a part of the family history prior to Vicki, but she considers it a blessing to be able to help and comfort others battling the disease. She was excited to say that her cousin recently rang the bell at Parkview Cancer Institute, signifying his final treatment.

“Had it not been for the yearly reminder and that pink coach coming out here every year, I don’t know that I would be where I am today in my survival story,” Vicki said.

Women like Vicki are pillars of hope, inspiring many, and acting as a reminder for all women to get their yearly mammograms and take control of their overall health. She’s a survivor and credits the Parkview Health team, Francine’s Friends and her friend and fellow survivor, Janice, for playing a large role in her diagnosis and survivorship. In hopes of paying it forward, Janice and Vicki continue to regularly attend survivor walks, supporting one another through their post-cancer journeys and those just beginning, or currently in theirs.

According to the American Cancer Society, breast cancer ranks second among cancer deaths in women. BreastCancer.org also states that more than an estimated 276,000 new cases of invasive breast cancer and over 48,500 new cases of non-invasive breast cancer are expected to be diagnosed in women in the United States in 2020 alone. With cancer numbers on the rise, your generosity is needed now more than ever. To make a difference in the lives of women like Vicki, you can donate in support to Francine’s Friends at Parkview.com/SupportFrancinesFriends or call 260-266-7800.
Posted by Francine's Friends at 1:47 PM