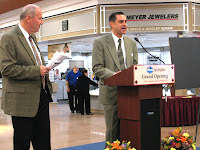 Kroger Village of Coventry presentation: Francine's Friends was one of the local recipients honored when the new Kroger Marketplace opened at Village of Coventry last fall. "We are thrilled to once again be one of the community recipients, and the donation will help cover the costs of screening mammography," said Francine's Friends Board President Sharon Simmons, who was on hand to accept the award.

"Kroger has been a long-time community supporter of Francine's Friends hosting the coach at various Kroger locations and providing financial support." The 125,000 square feet store at the Village of Coventry is the second marketplace store in Fort Wayne, part of a $100 million expansion in northeast Indiana.  The new store employs about 330 full- and part-time employees. Other board members in attendance included Irene Walters and Glynda Harris, along with John Elliott, Kevin Kotansky, Chris Gomez, and Dick Vanhorn of Kroger. 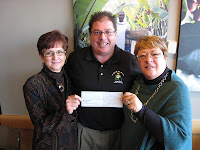 Todd Alber Memorial Outing: Board president Sharon Simmons and board member Glynda Harris received a check from Scott Downs in December. The check, in the amount of $2,000, is a donation to Francine's Friends resulting from the Todd Alber Memorial Golf Outing this past summer.  Principal participants Scott Downs, Jonathan Cutler, and Joe Barbarosa say they are planning the 2nd annual event for next year, tentatively scheduled for August 17, 2013, with proceeds again earmarked to Francine's Friends. 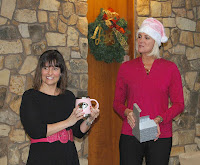 ABC 21Alive/I Wear Pink: Two-time cancer survivor Amy Wheeler was 40 years old with three children when she faced cancer in both breasts. Amy has channeled her emotions into a blog (amysimpactzone.blogspot.com) which has connected her with others who have supported her and learned from her experience. Amy's friends rallied around her and offered a fundraiser to help with some of the bills - Amy said yes, but insisted in giving part of the proceeds to Francine's Friends mobile mammography unit.

Click here to watch the 21Alive video about Amy

Posted by Francine's Friends at 6:28 AM