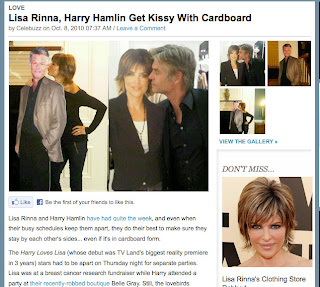 When we first found out Lisa Rinna would be able to join us for "Lunch with Friends, husband Harry was accompanying her too. If you happened to catch them on "Today" on Tuesday, in the middle of the telecast, they received a call that their boutique, Belle Gray, was being robbed. So instead of Harry coming with Lisa to us, he flew back to LA early to deal with that, and for an event at the store Thursday night.

At Thursday's "VIP" Meet and Greet, we presented Lisa with a life-size cut-out of Harry for her to keep at her side while in Fort Wayne so she wouldn't be lonely. She absolutely cracked up when we gave it to her and brought it with her to the luncheon to share with 600+ women. She even took pics with her phone and sent to Harry - it was a big hit!

The morning of the luncheon, she had already Tweeted about Francine's Friends ("what amazing women") and flat Harry, and the news made other media websites, because at the store event in CA, they ALSO presented Harry with a cut-out of Lisa! Said Rinna, "this is how we make our marriage work lol!"
Posted by Francine's Friends at 10:39 PM